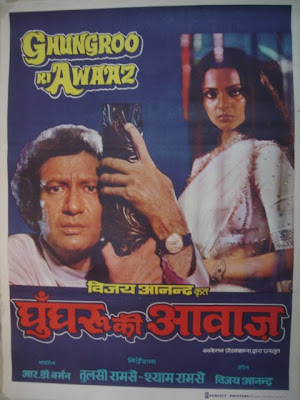 Here I am just right before the end of this month for what would be my last post for Rekhatober, I had prepared so much for Rekhatober but time would not allow, however the many Rekha movies I've watched are not wasted, and i shall be reviewing them randomly in the following months, also Rekha's induction into the bollywood fashion icon hall of fame shall happen at a later date next month. Seeing as today's Halloween i thought i'd round up Rekhatober with this Ramsay Brother chill fest or is it???
Its love at first sight when wealthy Ranjit (Vijay Anand) sets eyes on kajal (Rekha). Kajal however turns out to be a courtesan who's sick of her life in the Kotha (brothel), Ranjit buys her out of there and she comes to live with him 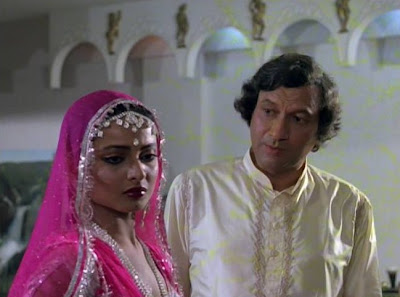 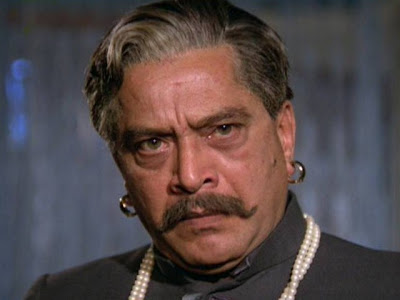 She receives a letter from one of her former lovers Shakal (Dheeraj Kumar)which Ranjit's uncle reads and then alerts Ranjit about. His uncle comes up with a plan to set her up, he decides that if she does indeed meet up with her old lover, then she's a fallen woman and would be kicked out, on the other hand if she doesn't she'll be received into the family as a honourable woman 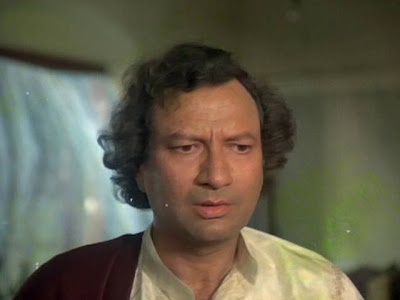 Thus Ranjit pretends to go a trip in order to catch Kajal red handed. Kajal falls for the trap as she does indeed go out to meet her lover Shakal (Dheeraj Kumar), but her intentions had been to poison him to stop him from coming back to her ever 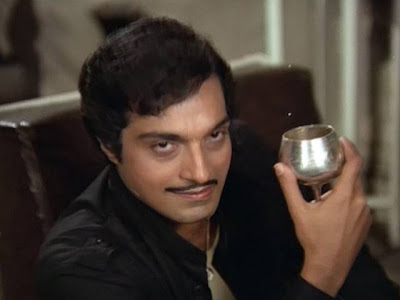 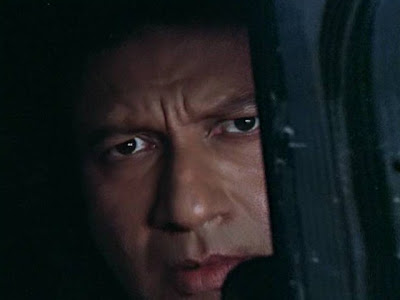 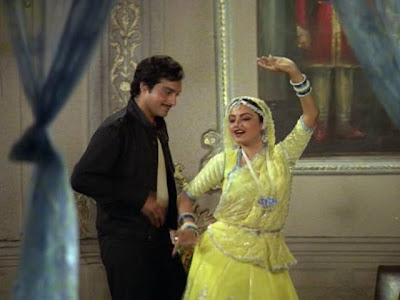 He and his uncle cover up the murders by setting the mansion on fire. Kajal's ghost soon starts haunting him relentlessly 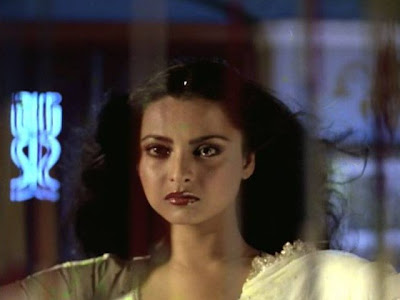 if Ghosts looked like this, then i wouldn't mind being haunted by one
While on a trip to Bombay to getaway from it all, he meets a doppelgänger of Kajal called Kiran, she becomes his nurse and he falls in love with her too 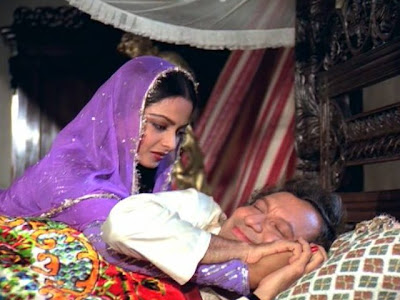 So cute na, just look at him feeling very pleased with himself
But Kajal won't let him rest and keeps appearing to him and begins making threats to kill Kiran since he has stolen her happiness, in other words if she couldn't live with Ranjit neither will Kiran 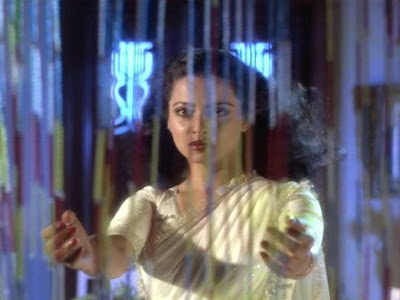 Who is this doppelganger and why does she look so much like Kajal? Will Kajal succeed in her mission to kill?
Oh plus the cops are now on Ranjit's back over the murder that took place in his mansion
Ghungroo ki awaaz (The sound of the anklets) is not a great film by any means and those who are expecting the usual Ramsay brothers horror fest better look away as this film isn't their usual blood fest since Vijay Anand who starred in this was the producer himself, all that Ramsay brother gore had to be cleaned out. Indeed one might ask why he casts himself in this, i can only guess he was besotted with Rekha and wanted to share Screen space, just look at him in the pictures below

With that said I enjoyed the film despite its bad screen play, editing and so many other faults like this imdb reviewer lists here. For me Rekha and her ravishing beauty and the drama she brings to the role, gave me my money's worth. Overall Ghungroo ki awaaz (The sound of the anklets) is quite a watchable and a little enjoyable suspense melodrama ridden with plotholes, i wish it had been more chilling and a bit more daring but overall not a bad watch especially for Rekha lovers and for R.d. Burman's music. And oh, watching Vijay Anand scream like a little girl at the sight of Rekha's ghost added much to my enjoyment ;-)
For all Rekha lover's out there, feed your eyes 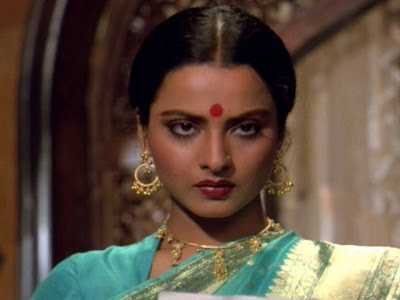 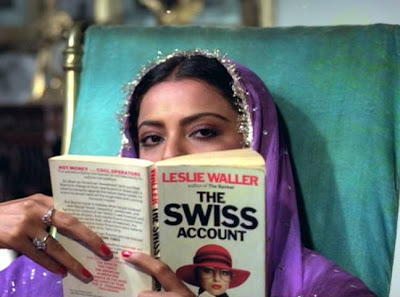 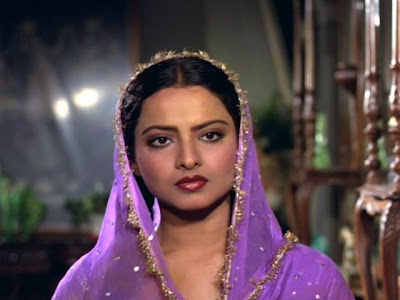 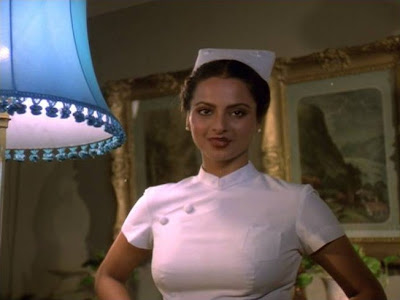 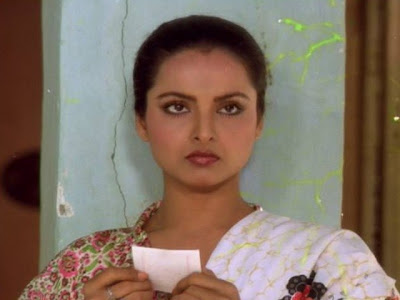 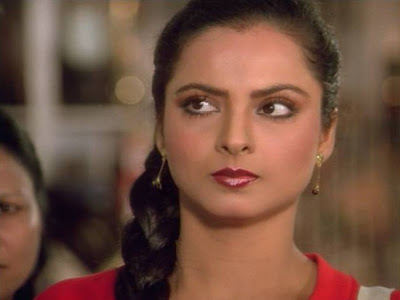 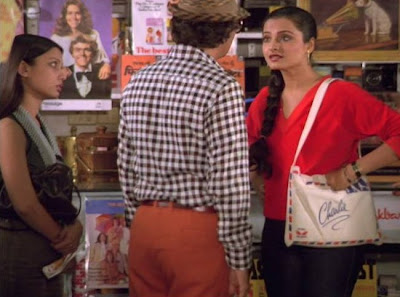 Ah how cute is the charlie's bag
Other Eye Candy 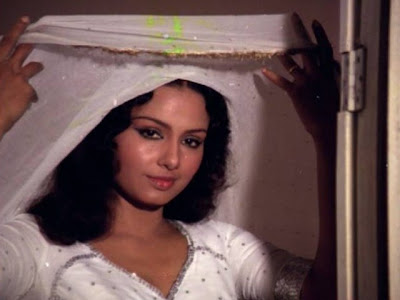 Padma Khanna had a small role
Tyhe other reason i'll forever remeber this film are R.D. Burman's songs on here, they're all winners from the fantastic 'ankhiyon ka kajra', the beautiful 'pagla pagla' & 'jo bhi tune dekha' i could go on and on but the two I've chosen to embed are the beautifully haunting 'rote rote naina' - i loved the lyrics to this so much and i wish i was able to upload them with english subtitles but the dvd kept playing up
and the other the wonderful Kishore Kumar number 'o mere humraaz (tere ghunghroo ki awaaz)'
Paisa Vasool rating: 5/10 (worth it especially because of R.D. Burman's music)
Posted by bollywooddeewana at 21:05

Vijay anand and rekha? Not so appetising...But still i'll try of you recommend it :)

It never ceases to amaze me how striking Rekha was in her younger years. I'm so not used to seeing her like that.

What a beautiful bhoot! But after having seen Vijay Anand look so good in Agra Road, I'm less inclined to watch him in these later films - somehow the contrast between the 'then' and the 'now' is too glaring!

@ Sharmi Yes indeed not so much but the songs and Rekha m,ake it work all in all not an entirely awful watch

@ Shell I'm glad you do do so continually, Yes i know you've only seen her in krrish, koi mil gaya and OSO those don't do her beauty full justice

What a wonderful blog! Thanks for this information, it's quite useful. corsetsnmore is an established brand that deals in all varities of corsets. It has a special product range designed for plus size corset dresses, Corset top for women, Black corset top, leather corset tops, underbust corset tops, Overbust Corset Tops, Halloween Costumes, Plus size underbust Corset.