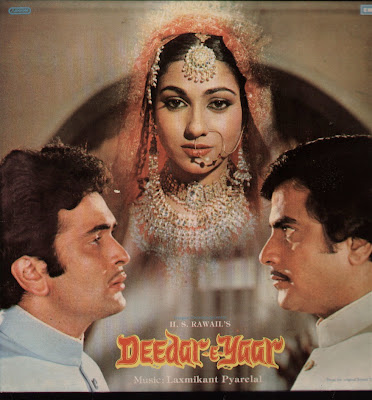 This is the film that almost or should i say put Jeetendra's account in the red for sometime, he had invested heavily in this Muslim social only for the film to flop, leaving Jeetendra with a debt of R2.5 crore, thankfully his account survived the woes this movie thrust upon it with the subsequent hits he had afterwards
Nawab Akhtar (Jeetendra) & Javed (Rishi Kapoor) are best buddies, Javed falls in love with the gorgeous Firdhaus (Tina Munim) the daughter of a wealthy Nawab Changezi (Shreeram Lagoo) 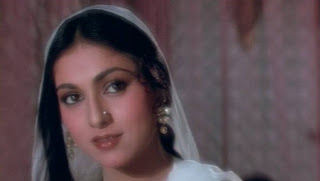 Nawab Akhtar too meets her and falls in love with her, not knowing she's the same girl his best friend Javed is in love with

Firdhaus on the other hand feels more affection towards Javed and when she realises both are friends she keeps quiet (why would she do this you might ask, Ah things have to get dramatic after all, otherwise we'd have no story)

When Nawab Akhtar's sister's marriage falls on hard times due to her husbands frequent visits to Lucknow's top courtesan Husna (Rekha), he visits her to quote a price that would stop her from seeing Nawab Jehangir his sister's partner

Husna is smitten by Nawab Akhtar & She agrees she would stop dancing for Jehangir provided Nawab Akhtar comes to visit her every evening, Nawab Akhtar agrees, Husna is thankful and hopeful this encounter might lead to marriage with Akhtar which would eventually lead to her being rescue from her disgraceful profession

When Firdhaus's father (Shreeram Lagoo) disapproves of her marriage to Javed due to a taint on his family honour, Akhtar in a silly and rather dramatic move decides he'll marry the woman in question for Javed's sake, and then divorce her, Akhtar thinks her family who would not want anything to taint their honour, would then be forced to marry her off to Javed

Following his decision to marry he goes to Husna one last time, telling her he won't be seeing her again as he's getting married soon, Husna is heartbroken but puts on a brave face 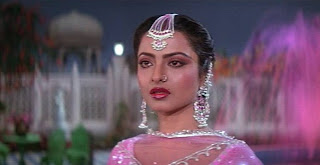 On the of the wedding he realises he's married none other than his beloved, Firdhaus

Will he divorce her or keep her to himself? Will Javed & Akhtar friendship withstand the strain? What will be Husna's fate, will she be able to endure the heartbreak?
So why did this film fail? This film is directed by none other than the great H.S Rawail who directed Muslim Socials like 'Mere Mehboob' & 'Mehboob ki Mehndi', surely one would think this would have given the film some status, or perhaps a Muslim social with bits of dishoom dishhoom factor thrown in just didn't sit right with audiences we would never know. As over dramatic and a bit silly Deedar E- yaar (Seeing my beloved) is, its enjoyable and it keeps your attention (well if you're into melodrama) if not for the plot then for the songs at least
still there's a lot to admire in terms of set designs, the Lucknow type interiors and outfits

And Rekha brought some serious drama, i particularly love this scene beow, thank God i didn't watch this film as a kid, i'm sure i would have made an attempt to reenact the scene, i know its just something i would have tried doing, check out how the camera revolves around her towards the end

The songs by Laxmikant Pyarelal i would have thoughT would have elevated the film to be a hit as they're all classics from the lovely 'Tum ko dekha to' the wonderful 'Jaana jaana jaldi' & 'aayee phoolon ke' a rafi & Kishore duet 'mere dildar ka'. My two favourites though is the romantic 'Sarakti jayen Rukh se'
and the awesome qawalli 'idd ka din hai' where Rishi really proves no one can work a qawalli any better than him

Mehboob ki Mehendi was another disaster despite very good songs.

Thanks a lot for that additional info and insight, i haven't seen Mere Mehboob but your point makes a lot of sense on perhaps why the audiences were uninterested in Deedar-E-yaar

Most welcome bollywooddeewana!
Mere Mehboob was just outstanding. The title song of Rafi Sahaab, Mere Mehboob Tujhe Meri Muhabbat ki Qasam sums up the romantic settings and background. Of course, in western culture, it may be misunderstood. But if one watches the movie by harking back to the days of Nawabs, and adhering to the Lucknowi 'tehzeeb' and muslim socio-culture, then here's a real treat. The songs were lovely. Sadhna has never looked so beautiful, Rajendra Kumar never so romantic, and Ashok Kumar never so non-plussed. As for Nimmi's nautch girl, here's one of her last roles that is worth seeing.

Wow, totally love the new look of your blog! Gorgeous! Also loving the Jeetu0fest, he usually gets no love (or very little anyway), so nice to see him being appreciated. I am interested in seeing more of Rekha's films so might check this one out...

Nice songs this film had. And Tina and Rishi look cute together in the sarakti jaye hai song.

@ Nasir I'll be sure to check it out, i love Rajendra as well as Sadhana

@ Daddy's Girl Thanks a lots for the compliment, Rekha didn't have much to do as she wasn't one of the central characters but its still worth watching none the less

@ Avdi Indeed, they make such a love pair & the songs are the reason i bought this dvd

This sounds like a variation on Chaudhvin Ka Chand where Guru Dutt lands up being married to his friend's love interest because said friend (Rehman) is in love with an unknown beauty (Waheeda Rehman) and persuades Guru Dutt to accept an offer of marriage that comes for himself! Oh! There was Badalte Rishtey with the almost the same leads (Jeetendra, Rishi and Reena Roy) which had a similar plot too... It no wonder I am confused whether I saw this film or not! :-)

@ bollyviewer Thanks for that bit of info, you know i still haven't seen Chaudvin Ka Chand but from how you've described it, they sound so similar, have a look at the songs i've linked, that should help confirm things

So true...there are so many movies with such similar plots. I was confused about this until I saw Rekha's death scene. I had seen this movie as a kid and had found it so very dramatic even then and somehow never felt like watching it again...but I guess it would be pretty entertaining to watch it again now :P
Badalte Rishtey was a little different as in the two heroes aren't friends (the sacrifice would have made more sense if they were though)- Reena and Rishi are head over heels in love with each other. And one day Jeetu sees her and falls for her at the very first sight, thus forming a triangle. Jeetu belongs to a pretty well-to-do family so when his family goes to Reena's place with a proposal, hardly anyone objects to it, not even her. Reason being : an astrologer tells Reena that as per her stars she has chances of losing her first husband and getting married again. So she gets married to Jeetu hoping that he dies soon so that she can get married to Rishi.
The only thing I found bearable about this movie was the way they treated the third angle of the triangle.

@ Sunehri Thanks for the detailed synopsis of Baldaltey Rishtey, it totally sounds up my street as i love Reena a lot, i'll be sure to check it out

I think this is rather twisted form of Chaudhvin ka Chand. But it has one of my favourite songs, Sarakhti jaye rukh se naqab.... It's an absolute wowww!!!