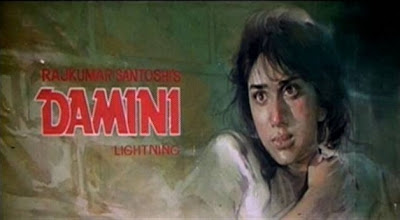 This movie has been sitting on my shelf for ages, and what a beautiful movie it turned out to be when i finally sat down to watch it, a wonderful film on being true to yourself and doing the right thing, all delivered in a non preachy manner

The film starts with this quote by Mahatma Gandhi 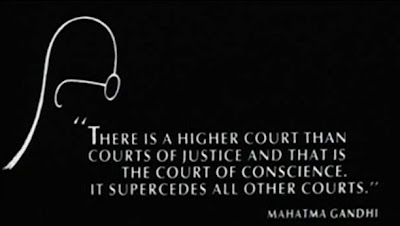 Damini (Meenakshi Sheshadri) is a honest good natured girl who lives with her family. While performing at a charity gig alongside Aamir Khan (as himself in a special appearance). Shekhar (Rishi kapoor) the son of a wealthy industrialist who's an audience at the show is smitten by her 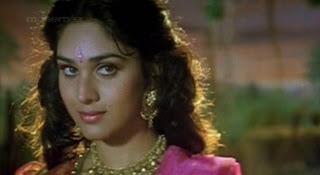 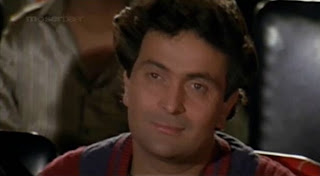 Shekhar tracks Damini down and proposes, Damini is taken a back by his advances as she comes from a much poorer family as well as Shekhar's quick marriage proposal.Shekhar's Parents aren't too keen on Damini as she's from a lower ecomomic background but Damini's charming honest nature wins them over and she and Shekhar get married 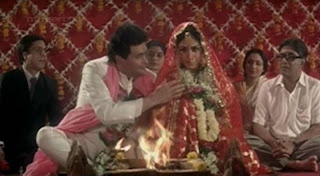 During Holi festival Shekhar's junior brother Rakesh along with his friends rape the family maid servant 'Urmi'. Damini witnesses the event and runs to get Shekahr to help but by then Rakesh and his friends had gang raped her. I f all their wickendess wasn't enough, they went ahead and dumped her body by the road side 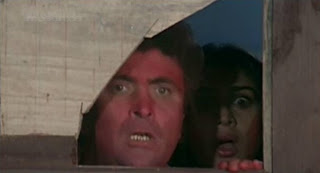 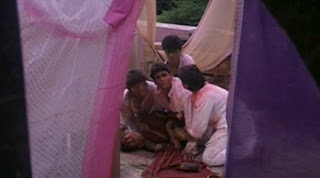 When police come to investigate the matter Damini is told by her in-laws to deny she witnessed the event, they ask her to help protect their family's honour 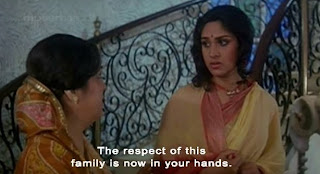 Damini begins to feel uneasy about the whole issue, she's racked by immense guilt and feels its up to her to get Urmi justice. She confesses the truth to Inspector Ratan (Vijayendra Ghatge) and agrees to testify in court much to the anger of her in-laws who feel she's betraying them 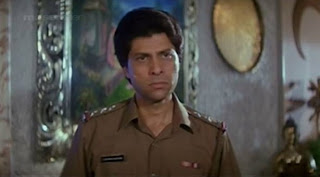 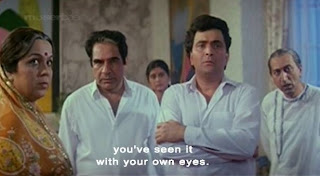 The family are tried to court and The Gupta's appoint Barrister Chhada (Amrish Puri in a swish hairdo) to defend them. Barrister Indrajeet Chhada who is defending the Gupta's comes up with a plan to silence Damini by proving her mentally unstable to the Judge 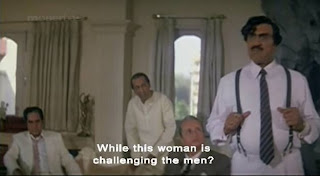 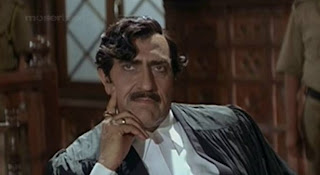 He does this by various witnesses including her in-laws and her own father, as a result Damini is sentenced to a mental asylum for 2 weeks, there she's administered severe head shocks which starts making her mentally retarded 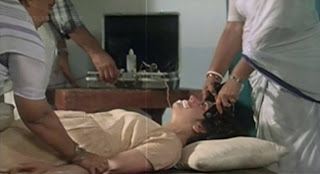 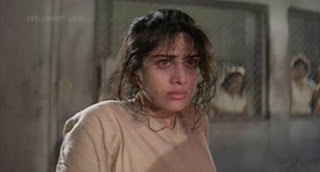 Damini manages to escape from the mental asylum, while on the run for her life she meets retired disillusioned lawyer Govind. She tells him her story and urges him to take up her case and get Urmi Justice 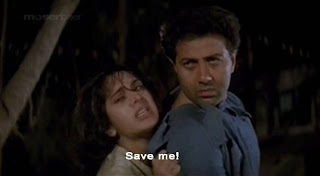 He agrees and thus commences a big court room showdown 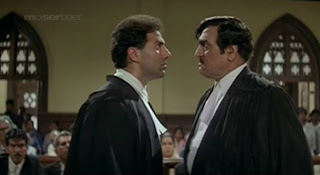 Will Damini get Justice for urmi? Will she be proved as mentally stable? watch Damini for the answers

Damini wthout doubt has to be one of the top drama's produced in 90's bollywood, great direction, great cast and a great story, the film also deals with mutiple issues such as the lengths people would go to protect their honour, maniplulative/exploitative media, corrupt cops and the politics of rape. 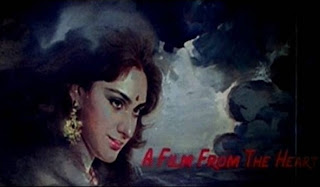 This film really had me involved and i kept thinking what would i have done had i been in her shoes, would i have gone with the easy way out and agreed with my in-laws or would i fight for the truth, these are not easy questions and we see Damini's anguish over these not so easy choices. Damini also makes a point of the outspoken woman, who dares speak against the 'patriarchal powers' that be, being punished for daring to make her voice heard.

This film would have scored much higher with me if the director had been a bit more careful with his screenplay for example during Damini's trial her lawyer doesn't object to the intrusive questions Barrister Chhada asks her, the courtroom scenes were sometimes treated as a joke with both lawyers calling each other up but of course i'm sure Rajkumar Santoshi had to strike a right balance between making a powerful drama that would also be commercially successful, and i shall not hold him up for that

Great performance from Meenakshi Sheshadri, i think this is her best ever role, her portrayal of Damini was just right, so much passion, so much guilt, you feel every bit of her anguish/inner turmoil on what choice she should make. 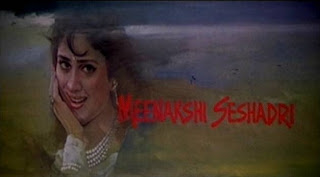 Rumour has it that she quit the film industry as her performance of Damini didn't get her a filmfare best actress award, my dear Meenakshi forget about those award shows what matters is the appreciation and love of the fans. And might i add Meenakshi is such a fabulous intense dancer (check her out doing some traditional Indian dances in the clip below), its no wonder she currently teaches dance lessons in Plano, Texas where she now lives with her husband and kids. For more on what Meenakshi has been up to check out Nicki's great Fan Post

Good performances from Amrish Puri and Sunny Deol as well, who knew Amrish was a computer game freak, he was so funny and over the top as usual, he never bores me 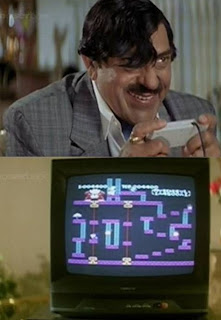 Sunny Deol was loud and his dialogues from this film are said to have been the rage at the time of its release, but since i don't speak hindi i couldn't understand what the fuss was all about, but he delivered his dialogues with much gusto and passion 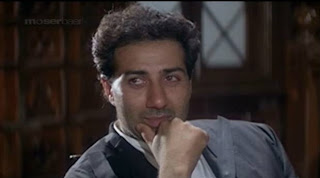 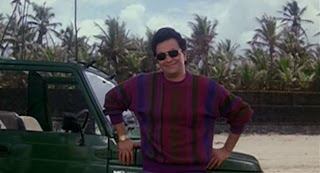 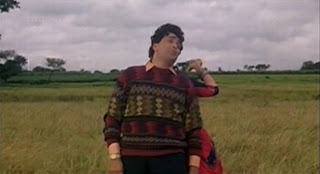 Brilliant songs from Nadeem-Shravan as well, from the melodious 'gawah hain chand tare' which was lifted from the famous African song 'Malaika' (listen to a version of the song by 70's group Boney M. here) 'bin saajan jhoola' where Aamir khan makes a guest appearance and then my favourite has to be 'jab se tumko dekha' with lovely vocals from Kumar Sanu and Sadhana Sargam

BUY DVD
Posted by bollywooddeewana at 15:57

Meenakshi was--and probably still is--an amazing dancer. Haven't seen of her films, but have watched clips of some of her dances from various films on YouTube.

Damini sounds interesting. I think I've seen it before, but maybe it was just a couple of clips on YouTube, I don't know. It just sounds very familiar. Anyway, I might have to check this out.

I saw this flick. Meenakshi was great, so was Rishi. He was the top dog then, even though he was thickening rapidly.

This was a sorta 'comeback' movie of Rishi's. His dialogues were over the top, but they worked. He got an instant reputation for being a 'good actor' after this.

Another case for the use of shock therapy! I wonder if this was on Bollyviewer's list of medical miracles - although it seems that it made her condition way worse!
I just can't get over Rishi's love for pattern sweaters.

@ Lapetite diva, do check it out, its an interesting watch. Meenakshis dancing became apparent to me ever since i saw her Hero (her first r second film i believe)

@ Avdi Meenakshi was indeed fab, Rishi was great too but most of the film was designed to rest on Meenakshis's role/performance and you're right Rishis was getting thick but he still pulls off his role real well

@ Shell It did indeed make her worse but only temporarily though,not this wasn't on bollyviewers list... lol It would have been if it it had cured her maybe. Rishi's jumpers are indeed a joy to behold, i see similar time and again at my local department store

As you know, I recently bought this! Thanks for reminding me what a wonderful film it is

Forgot to mention, thanks for the shoutout!

This movies goes down in Bollywood history for having had the most immortal lines for Sunn Deol - Taarikh Pe Taarikh.

And Amrish Puri's Jhatakte Baal is Bollywood kameenapan at its best.

Loved your review!!!
And watch out for an awesome list to come up on my blog soon. Shall give you a shout.

The first thing that comes to mind when i think of damini is tareekh pe tareekh pe tareekh..it became one of the most imitated monologues in Bollywood... (almost like Shatrughan sinha's - khamoshhhh or Shashi kapoor's mere paas ma hai (*_*)
i thoroughly enjoyed the film and your review...
gawah hai chaand tare gawah hai - one of my favorites songs... your review makes me want to watch it again :)

@ KunalMistry Thanks for stopping by and commenting, i'm off to correct that mistake. Thanks once more x

No wonder you don't speak Hindi, you couldn't understand much about the greatness of this film.

great performance meenakshi. after a long time today again I saw ur movie and really I feeled the same pain and anger as I felt when I saw the movie for the first time.miss u meenakshi. ..