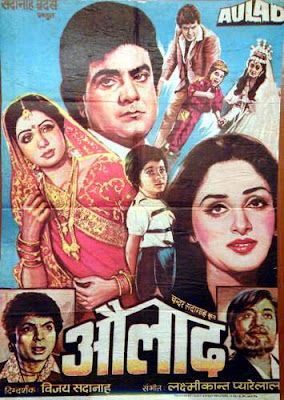 keeping this blog is becoming more of a challenge but still, i'm committed to the cause, apologies for my short absence. The fourth film in Sridevipalooza is a remake of a bollywood classic i reviewed a while ago, follow the plot write up and see if you're able to guess correctly

Wealthy and successful Anand is under intense pressure to get married from his Uncle (Saeed Jaffrey) he takes poor street dancer Devki (Sridevi) as a pretend bride, the two fall in love and Anand marries her 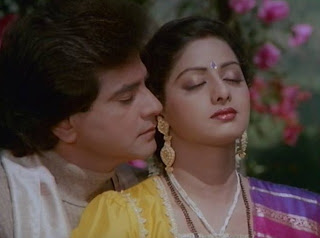 Following their marriage and while on honeymoon in Kashmir, their intimate moments while romancing in a garden is cut short by torrential rainfall, both couples take refuge in a nearby house which belongs to another newly married couple Vikas (Vinod Mehra) & Yashoda (Jaya Prada), both couples become friends 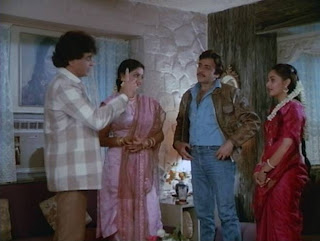 Upon returning to Bombay Devki finds out she's pregnant, simultaneously in kashmir Yashoda finds out she's pregnant too. Months later and Devki gives birth, following the doctors orders to take their new born away from the hustle and bustle of Mumbai, they catch a train to Kashmir, also on their way to Mumbai are Vikas and Yashoda. In a weird case of coincidence both trains crash into each other which claims Vikas's life, Devki is also feared dead 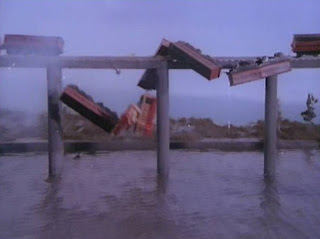 Nevermind the accident made use of Toy train models 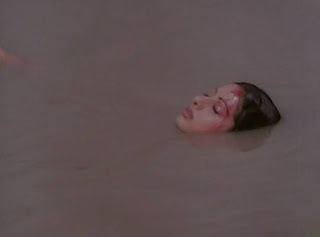 Anand and Yashoda end up in the same hospital, Yashoda gives birth to a still born, and Anand not wanting to break her heart further seeing she's just lost her husband decides to give her his own son, he asks the doctor (Ramesh Deo) to keep this a secret betweeen them 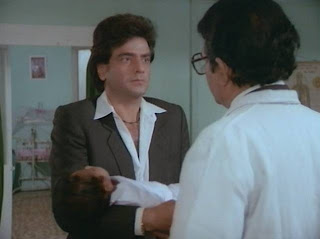 Years go by and Anand starts visiting Yashoda just so he'll be able to see his son, the boy is now named kishen and Anand becomes increasingly attached him and Yashoda which leads to her mother in law speculating about a possible relationship, she's warned not to drag the family's name into disrepute (but surely she's now a widow, shouldn't she be allowed to see other men na?) 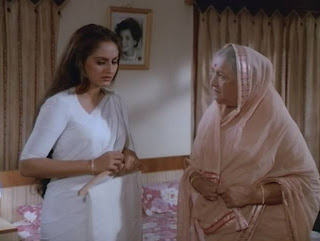 She's warned not to see him again, this new decision proves difficult as kishen is already developing a strong bond with Anand whom he sees as a father figure 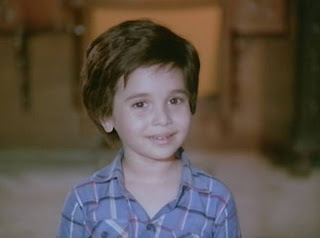 The sweet Baby Guddu as Kishen

Meanwhile Devki who had been feared dead turns up alive at Anand's house, its revealed the accident had left her with memory loss but she had regained them upon seeing a speeding train which clearly reminded her of her accident (easy, isn't it...lol) 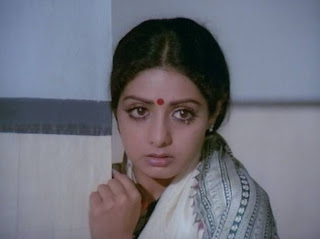 Anand is shocked and equally scared as Devki asks about their child, without hesitating Anand lies saying he had died in the train accident 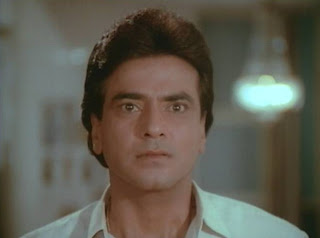 Poor Devki is distraught, but decides to move on, hopeful she might bear another child, but as destiny would have it, she's receives another bad news when the doctor tells her she will never be able bear another child again 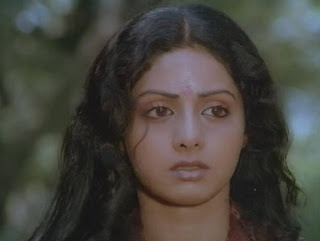 Devki accepts her destiny but later becomes suspicious of Anand's clingy behaviour towards Kishen, plus she notices they seem to share some traits, she confronts Anand about this and he confirms Kishen is indeed her son 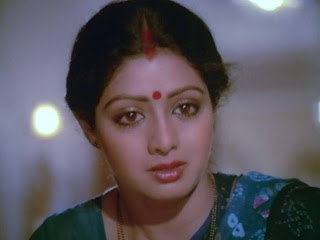 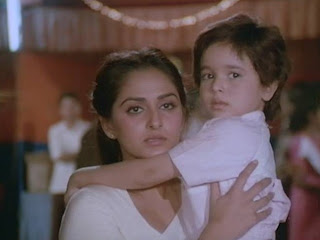 If the story of this film sounds familiar, that's because it's an uncredited remake of 'Chirag kahan Roshni kahan' (1959) which i've reviewed here, Chirag Kahan Roshni Kahan is by far the superior film, this 80's knock off just doesn't have the restraint & melodramatic goodness of the original plus the songs in this are nowhere as fab. Some twists have been added to the story here, but 'Chirag kahan Roshni Kahan' still comes out on top in my opinion. 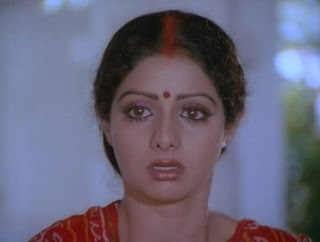 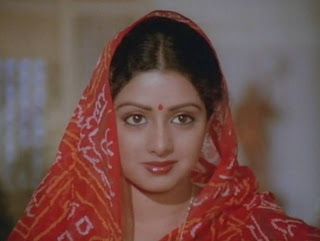 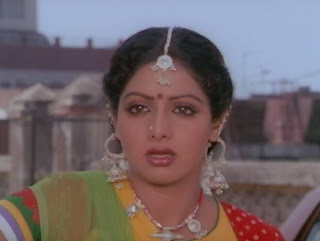 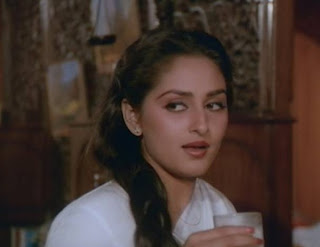 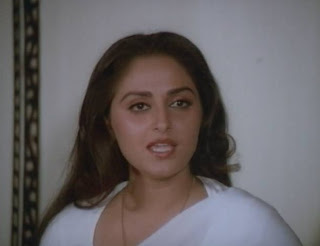 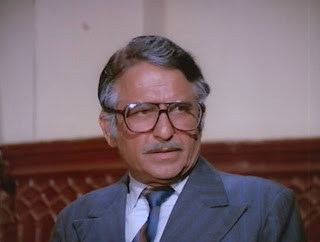 Ramesh Deo still so handsome despite all that Grey hair 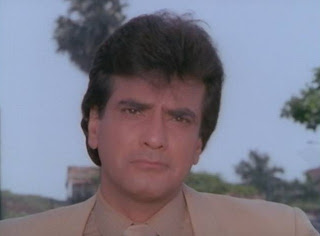 Aulad is available with English Subtitles in 21 parts on Youtube
Posted by bollywooddeewana at 09:02

I had seen this film more than a decade ago. Nothing great about the film but from what I remember there wasn't anything bad about it too. At least it wasnt as loud as other films of the era.

Nice review BD especially your comparison of the movie with Chiragh kahan Roshni Kahaan is outstanding to say the least. I always get confused with the name AULAD as there were several of them. In fact, I was reminded about Jeetendra-Babita's AULAD. That was n enjoyable movie and loved those songs there, especially ARMAAN THAAH HAMEIN JINKA and AB KE BAHAAR AAYI HAI TUMHAARE NAAM SE. So I guess this Aulad is better than the later one.
Oh yes, regarding your question:
(but surely she's now a widow, shouldn't she be allowed to see other men na?)Now this subject too has been flogged in many Hindi movies since widow-remarriage was and perhaps is, looked down upon in Indian culture. PREM ROG (1981) dealt with this. So also EK HI RASTAA (1957) and some earlier movies too.

As soon as I saw that you'd reviewed Aulad, I thought: "Ah! One film I've seen!" But no, the Aulad I've seen is the Jeetendra-Babita one. I am not a fan of 80's Jeetendra, so will stick with looking out for Chirag Kahan Roshni Kahan instead!

So if Sridevi gets the role of Minoo Mumtaz, it can't have been bad!
so the ending must be bump off the widow!
Poor jaya!

Starting to read the post I thought the story sounded similar to Chirag Kahan Roshni Kahan, and then of course you confirmed it. Great post. But, I'm stull going to be in favour of Rajendra Kumar-Meena Kumari than Jeetendra, Jaya and Sridevi :)

@ Nasir thanks'i'm familiar with those other films as well, and i'm on the look out for the jeetendra/Babita one

@ Dusted off Lol by all means stick to that one

@ Sharmi Thanks, lol...like dustedd off by all means favour that one

Jaya is always superb and soothing to eyes. She in yesteryears was like Goddess Durga or Lakshmi not like sridevi who beat the goodas jumping from a five storyed house. But she somehow destroyed Jaya's career intriguing with another south heroine and some producer/directors. Here Jaya with wet hair looks heavenly. may GOD bless Jaya with peace, good health and success for rest of her life.

At last who wins the custody?